Here are a few videos that were created by the students of the 2017 CSE 20133/20232 programming class, to demonstrate their end-of-semester projects. This class consisted of EE and other non-CS engineering students, and taught programming using C and C++.

This is a series of videos that I recorded for the benefit of my Intro to Computing and C/C++ students, to teach them basic command line skills. Since it's on YouTube, you can change the playback speed in case I'm speaking too slowly. Enjoy! 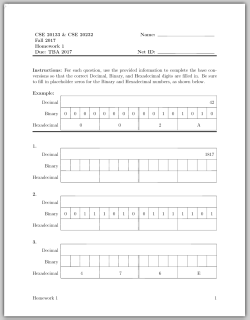 JavaScript has always been a powerful language, but it is not always pretty to look at. ES6 has also greatly improved the syntax of the language, and although it's not perfect, it's not that bad, either. Some of JavaScript's limitations are also its strengths, which is what we will see when we examine the JavaScript coroutine pattern.

I was recently working on some code in which I wanted to use Promises, but all that I had was callback-centric code. In the past, I have imported libraries such as bluebird for this particular problem, but now that seems like a bit of overkill to get just one function. I'm already using ES6, so I don't need a polyfill in order to use Promises; all that I want is a simple promisify() function. Importing an entire library for one function is, IMO, wasteful. Besides, it's more fun to write (and therefore understand at a deeper level) your own implementation, so that's what I did.

If you don't care about why this code works, then you can see it in its completed form below. If you are actually curious as to how I came up with it, then read on and I will explain it to you. The finished code is as follows: